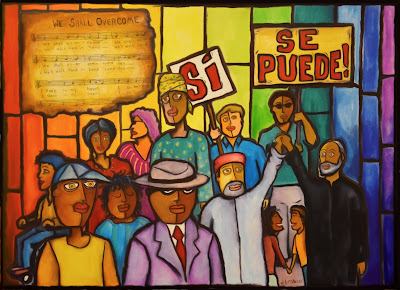 Hell, lead the way, you trees and rivers and skies and oceans! Make way for the awful and glorious wisdom of a Just and Stern Earth.

Lead the way past the racists and those who embrace violence... those who fear what ought not be feared.

Lead the way for wealthy, powerful white men, who will only have Life to gain by releasing the power and wealth that they so often drown in.

Lead the way to a better - if imperfect - tomorrow.

"In the last days, God says, I will pour out my Spirit on all people. Your sons and daughters will prophesy, your young men will see visions, your old men will dream dreams."

~The Prophet, Joel
Posted by Dan Trabue at 6:55 PM

Wisdom demands...it pleads...for a rejection of the Democratic Party, save just enough of it to remind us of what dishonesty and moral corruption looks like. Indeed, your post sounds as if you're warning against Democratic support.

The GOP is certainly flawed. Just not in the way your lying seeks to paint them. At their worst, they resemble Democrats.

A commenter who I suspect is a troll raised the question of why not vote for Republican women? I always support voting for the better candidate...

However, I agree with many conservatives this year that the Republican party is sick, perverted, disturbed and a threat to our better ideals. These conservative commentators say that the GOP has been embraced and taken over by those who tend towards racism, who tend towards hatred of immigrants, who are misogynistic or at least willing to allow misogynistic racist anti-immigrant people lead their way. These commentators note that the GOP is sick and needs to be stopped and as long as not there's not a fatal flaw with another candidate, that people should vote against the GOP.

They should do so Mindfully, deliberately, with a good deal of forethought and sobriety. Contrary to what some trolls might say. I tend to agree with those conservatives who are advocating this.

"I always support voting for the better candidate... "

You didn't in the last election and it grates on you to realize how much better he's proven himself to be.

"However, I agree with many conservatives this year that the Republican party is sick, perverted, disturbed and a threat to our better ideals."

Agreeing with "conservatives" doesn't help you if they're as wrong as you are and as insulting to the many who voted for and continue to support this president and all the good things that have resulted on behalf of ALL Americans as a result.

Then again, like you these "conservative commentators" are liars, as the party has NOT been "taken over" by racist or haters of immigrants (a standard lefty lie) or women...nor do such people lead the party. These unsupported, unproven assertions prove that you lie worse than the president who lives rent free in your mind because of alleged lies.

These "conservative commentators" actually believed it was better to see another four years of Obama's destructive policies in the form of the reprobate Hillary Clinton, who would have placed anti-child, anti-family judges on the courts, as well as continued other leftist anti-American policies, than to elect a guy who doesn't appear to be as sophisticated as they are.

You'd laud Satan if he came out against the GOP.

Well, he have to step down from the presidency first, right?

But no, if Trump / Satan were to denounce the GOP, I would suspect this just another of his gambits to con people, because that's what Trump does.

If you truly think the moron in office is Wise, well it's your opinion, you can hold it if you want. I think it's quite clearly an obviously ridiculous opinion to hold, but you're welcome to hold it.

Just recognize there's no data to support the suggestion.

The message from the Republican Party to the American people is racism and fake terror. It seeks to manipulate Americans in order to make money.

I stood in line for two hours to vote - unheard of in my neighborhood of Brooklyn - in a room where other Americans, black, brown, gay, trans, parents, and those that needed canes and wheelchairs, all of us, were eager to lift our voice in opposition to this regressive, misanthropic Republican Party.

I voted for the most progressive, aggressive liberal candidates possible not because they are perfect, but because 1) I have that privilege as a New Yorker that radical compassion politics is available, and 2) because EVERY GODDAMN STUDY AND EXPERIENCE IN DEMOCRACY LOUDLY PROCLAIMS THAT INCLUSIVITY, EQUITY OF RIGHTS, AND COMMUNAL LOVE MAKES A BETTER WORLD FOR ALL OUR CHILDREN.

I had a similar experience at the polls, Feodor. Friendly, energized people of all stripes and colors were there with hopeful looks on their faces.

Unfortunately, we find ourselves in a place where a minority of voter opinion rules the majority. It appears that some 30-40-ish % of the people support Trump and what he stands for and are okay with all the racism, sexism, xenophobia, anti-liberty, amoral and immoral values and lies that go along with it. If not "okay with it..." they are at least okay ENOUGH to keep supporting him, which comes down to, they're okay with all that irrationality and immorality, hatred and lies.

But we are not a democracy, we are a Republic. What does the majority do when the minority has the rules behind them and are willing to embrace the bad to get what they want (or what they think they want... they almost certainly don't want lying, attacks on women and immigrants and minorities to be the Rule under which they lie, because they ARE the minority and their women and children live under those rules, too...)?

By the way, Feodor, I'm effectively blocking at least one commenter here who I suspect is a troll, given his continual irrational comments and dodging of questions. I don't think you are a troll, but you do exhibit some of the same behaviors as a troll, continuing comments when asked not to, sometimes difficult to understand responses and bombarding with commentary that is sometimes off topic. If I asked you to send me an email with your name and some proof of who you are, would you do so?

And just like that, Feodor was able to demonstrate to me that he is a real person, not a troll. For others who display even more troll like behavior and want to comment here, just demonstrate that you are a real person. It ain't hard.

The Colorado cake baker who didn’t want to serve the gay couple now has a gay governor.

"Just recognize there's no data to support the suggestion."

Do you want the data now, or in your next post? There's plenty to demonstrate the wisdom of Trump. You lack the wisdom to see it, or the honesty to acknowledge it. Either is equally likely.

Your blocking of Craig is nonsensical and another display of your cowardice. He answers all your questions...you answer scant few. This is reality. And by the way, you're kidding only yourself in pretending you hold your alte-ego feo to the same standards you demand of your ideological opponents. Indeed, how did "he" actually prove anything to you? There is no contact info whatsoever for feo (not that I would ever have a need of it myself). You have no idea of whether or not he's a real person (assuming he's not actually you). Again, this is reality. Also reality is that you haven't the courage to actually engage like an adult.

One more "by the way"....Craig has to be a real person because a non-person is unable to post comments.

Well... that makes him a person. Doesn’t make him real. Real persons have compassion and love for all other persons and a rational moral based on that very behavior.

Unreal persons are Pharisees, brutalizing zealots, willfully behaving in ways that contradict their “profession” of being a real person. And then posing as ignorant of the whole thing. People like you, Marshall. You’re unreal.