What Have You Dismantled Today? 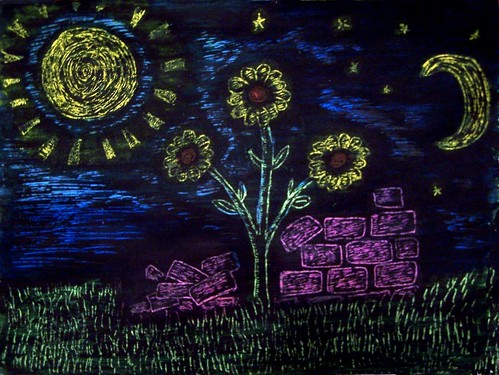 Tearing Down the Walls, a photo by paynehollow on Flickr.
An excerpt from a recent sermon by my pastor Cindy, at Jeff St Baptist...

In Adult Sunday School last week, we discussed Ched Myers’ book, Sabbath Economics. He talks about the disparity between the wealthy and the poor, and he says that the Biblical witness refuses to stipulate the injustice is a permanent condition, and, this is the line that caught some of our attention, “Instead, God’s people are instructed to dismantle, on a regular basis, the fundamental patterns and structures of stratified wealth and power, so that there is enough for everyone.”

[and here, he is speaking specifically in reference to the Sabbath and Jubilee laws - as well as touching on the Manna story, but he would argue that it extends beyond that... ~dt]

One thing that we liked about that sentence is, “God’s people are instructed to dismantle, on a regular basis…” We talked about how we have to continually remind ourselves that what we think we own is not really ours, but rather, God’s. About how hard it is when you grow up in this culture to really get that into your head and heart, how hard it is not just to dismantle an unjust system, but to dismantle predominant beliefs and values.

What have you dismantled lately? What are you in the process of dismantling?

When you look around, what is it that you see that needs to be dismantled?

This morning’s scripture reading is the first of a series of five stories in less than two chapters where Jesus, whose ministry and sudden rise to popularity has been briefly introduced by Mark, clashes head on with the authorities. There are many more confrontations to come, but it begins with this series of clashes.

In Jesus’ day, a physical illness or disability was seen as a consequence or punishment for a sin. If someone was healed from an illness, then in order to be pronounced clean, or forgiven, they would have to follow a certain procedure, in a lepers’ case, for instance, go before a priest, sacrifice an animal, pay some money.

But in this story, Jesus, upon seeing the paralyzed man, pronounces him forgiven, clean, before he’s even healed, before he’s seen the priest, before he’s sacrificed the animal, before he’s paid the money, before the scribes have had a chance to reclassify him.

“Your sins are forgiven,” Jesus says, and in those words, Jesus restores him to social wholeness. He’s welcomed back into the fold: You are no longer an outcast, you are no longer unclean. You are brother, you are father, you are son, you are restored to your position as a child of Israel.

Jesus restores him before he’s even been healed. The scribes go ballistic, and "for good reason,” says Ched Myers. “Their complaint that none but God can remit debt is not a defense against the sovereignty of Yahweh, but of their own social power.”

They accuse Jesus in the strongest language possible: “He blasphemes,” they say, which as you’ll remember, is the charge that will eventually be used to execute Jesus.

Jesus restores the man before he’s even been healed. “You can’t do that,” they say. At which point, Jesus heals the man, this time actually restoring his body as well. And so the scribes have been “out-dueled,” and Myers points out that the next time they appear, it will be in the person of government investigators from Jerusalem...

What have you dismantled lately? What are you in the process of dismantling...?
Posted by Dan Trabue at 7:30 AM 7 comments: Links to this post 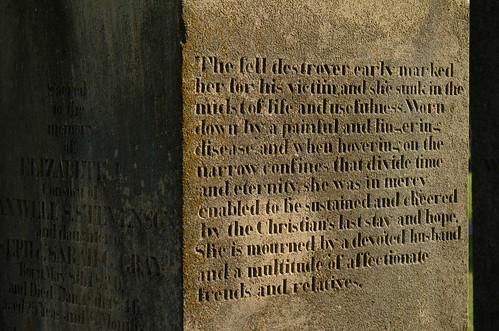 The fell destroyer early marked
her for his victim
and she sunk
in the midst of life
and usefulness...

Posted by Dan Trabue at 5:20 PM No comments: Links to this post 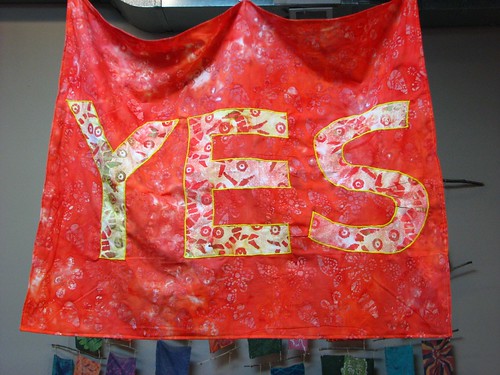 Yes Banner, a photo by paynehollow on Flickr.
A recent post over at Juicy Ecumenism revisited an article from last year's July Christianity Today magazine, in which three folk debated about whether flying a flag in your church is a good or bad idea.

The fella doing the "agin it" position noted the problems of associating your church with one particular nation, the problems of being unnecessarily divisive rather than inclusive, the problem of overtly or passively suggesting you are beholden to the state, of tying your religion to your state. Serious concerns, all.

I would add to that just the question of "Why?" Why would/should we fly a flag in our church service? Is this true of all nations or just the US? Should Chinese Christians meeting in secret for fear of prison fly a Chinese flag in their service? Did the early Christians fly a flag of Rome after Rome killed off Jesus??

What is the rationale for even considering doing this?

The two people in favor of flying the flag in churches suggest it as a way of honoring country and to encourage a good sort of patriotism. They also suggested a flag (again, any flag? just the US flag??) is a way of remembering that "greater love hath no one than to lay his life down for another..."

One of the commenters on the Juicy blog said that he would not go to a church that didn't fly a flag in their sanctuary. I just wonder, "Why?"

I also would point out that this sort of dogmatic belief is a very good reason to be wary of this sort of tradition.

To my understanding, having a flag in sanctuaries is a very new phenomena, beginning perhaps during the Civil War (when I believe BOTH sides flew their own flags and when an area was subdued by the North, I've read, they would sometimes replace the Confederate flag in a church building with a Union flag.) It certainly is not biblical nor an ancient tradition, not that I'm aware of (again, can you imagine the early church flying the flag of Rome?? How ludicrous!)

Perhaps not surprising, given my anabaptist background (anabaptists, by and large, do not have flags in their church services, nor do they pledge allegiance to a flag elsewhere), I understand the NOT flying a flag in church position. It seems to me to be the rational and moral position to hold to.

Given the, I think, serious reasons not to fly a flag, on what basis would we choose to do so? It's not biblical, it's not rational that I can see (ie, "Christians should rationally have their state's flag in their church because..." what? I can think of no rational defense for it) and it's questionably moral.

Having said that, I don't condemn my brothers and sisters in churches that have a flag. I grew up with it and know how culturally tied we are to the idea and it's really not like it's evil or anything to do it. I just can't think of any positive reason to do it.

Does anyone care to give it a try?

I would point back to the fella who said he wouldn't attend a church that didn't fly a flag in its sanctuary. I can understand that, perhaps for some reason - cultural, modern traditional, whatever - that people like the idea of it. But to say you wouldn't attend a church that doesn't fly one, that seems to me to suggest that you think it's wrong NOT to fly a flag. If there are people out there like that, I would ask, "On what basis would you think that?"

It's one thing to have it as a preference, but to actively think it's wrong NOT to fly a flag in your church sanctuary? That just defies reason, to me.

Thoughts?
Posted by Dan Trabue at 1:49 PM 17 comments: Links to this post

Get out your tin foil hats, people! Dan, Sarah and a Crazy Man, a photo by paynehollow on Flickr.

So, visiting over at John's blog and reading about how we should reject the notion of anthropogenic climate change because he cites sources (like globalwarmingskeptic.com) as "proof" that it's not happening.

I ask the fellas there, "But NASA, the AMA, the AMS and other very legitimate sources say that 97% of climatologists say climate change is real and likely due to human factors. Do you believe that NASA, the AMA and AMS are all lying or do you think they're all fooled, because they haven't gone to globalwarmingskeptic.com to learn the Truth?"

No answer beyond "I see you can't refute my sources!"

I ask, "I'm not a scientist, but I am a reasonable person. On what basis would I suspect that NASA, the AMA and AMS are lying/wrong and globalwarmingskeptic.com is right?"

The answer is to denigrate these scientists as also believing that gay people marrying is a good thing and...

and these same “scientists” go on record as believing in evolution!

And Trabue claims he is rational.

Dang them "scientists" and their lying ways.