No doubt, Jesus often did so. Now, does his frequency of citing Scripture suggest that this means that Jesus, therefore, called Scripture the Primary Source (or, the SOLE source) for knowledge about God? No, of course not. That suggestion doesn't follow. It COULD be the case, but the text does not demand or really even suggest it. It just doesn't.

But that got me to thinking: How often did Jesus cite other sources of knowledge?

For instance, in the story of Jesus healing the paralytic man lowered through the roof of a house, we find this exchange...

When Jesus saw their faith, he said, “Friend, your sins are forgiven.”

The Pharisees and the teachers of the law began thinking to themselves, “Who is this fellow who speaks blasphemy? Who can forgive sins but God alone?”

Jesus knew what they were thinking and asked, “Why are you thinking these things in your hearts? Which is easier: to say, ‘Your sins are forgiven,’ or to say, ‘Get up and walk’? But I want you to know that the Son of Man has authority on earth to forgive sins.” So he said to the paralyzed man, “I tell you, get up, take your mat and go home.”

In that story, Jesus does not respond to the Pharisees charge with Scripture, but with real world reasoning. "Which is easier, to say 'your sins are forgiven' or to say 'walk...'?"

It's a simple rational argument in response to accusations of violating their interpretations of Scripture.

Or consider another response to Pharisees complaining (and note: they were complaining because Jesus was violating THEIR UNDERSTANDING of Scripture)...

But the Pharisees and the teachers of the law who belonged to their sect complained to his disciples, “Why do you eat and drink with tax collectors and sinners?”

Jesus answered them, “It is not the healthy who need a doctor, but the sick. I have not come to call the righteous, but sinners to repentance.”

Same point in this story (again, with the Pharisees raising objections to Jesus' behavior...)

They said to him, “John’s disciples often fast and pray, and so do the disciples of the Pharisees, but yours go on eating and drinking.”

Jesus answered, “Can you make the friends of the bridegroom fast while he is with them? But the time will come when the bridegroom will be taken from them; in those days they will fast.”

Jesus goes on to tell a parable...

He told them this parable: “No one tears a piece out of a new garment to patch an old one. Otherwise, they will have torn the new garment, and the patch from the new will not match the old. And no one pours new wine into old wineskins. Otherwise, the new wine will burst the skins; the wine will run out and the wineskins will be ruined. No, new wine must be poured into new wineskins. And no one after drinking old wine wants the new, for they say, ‘The old is better.’”

In fact, as we all know, Jesus told many parables - simple stories usually featuring real world, natural circumstances to illustrate a point, to make a case.

He also told them this parable: “Can the blind lead the blind? Will they not both fall into a pit?

The student is not above the teacher, but everyone who is fully trained will be like their teacher.

Why do you look at the speck of sawdust in your brother’s eye and pay no attention to the plank in your own eye?

"Consider the lilies of the field..."

"Consider the birds of the air..."

“Foxes have dens and birds have nests, but the Son of Man has no place to lay his head.”

And not just the parables, his teachings are jammed with these sorts of observations, illustrations and analogies...

Someone told him, “Your mother and brothers are standing outside, wanting to see you.”

He replied, “My mother and brothers are those who hear God’s word and put it into practice.”

I'll close with one more, another instance of a Pharisee being self-righteously indignant that Jesus was not abiding by their interpretation of the Law...

When Jesus had finished speaking, a Pharisee invited him to eat with him; so he went in and reclined at the table. But the Pharisee was surprised when he noticed that Jesus did not first wash before the meal.

Then the Lord said to him, “Now then, you Pharisees clean the outside of the cup and dish, but inside you are full of greed and wickedness. You foolish people! Did not the one who made the outside make the inside also? But now as for what is inside you—be generous to the poor, and everything will be clean for you.

Simple real world reasoning. Natural world observations and illustrations. Over and over and over.

Does that mean that I think God is telling us that Reason is the Sole Source - or even just The Primary Source - for knowledge about God? No, God hasn't said that to me and I'm not going to claim God has. But clearly, folk who value what the Bible says can acknowledge how important real world reasoning and observations were to Jesus. I'd like to raise a question I've asked before in various ways and have never received an answer. I bring it up because, most recently, I've seen it argued at Stan's blog (the aptly named?), Winging It. The point of the post is his rather dubious and hole-y notions of Christian "essentials," but as part of getting to his essentials, Stan says, and I quote...

The Bible we have today is a translation of original texts that are, of a necessity, God-breathed (2 Tim 3:16-17). They were not merely "inspired" as we might use the term today, but actually breathed by the Holy Spirit to His authorized messengers who, in their own words and under the supervision of the Spirit, wrote down what God wanted His people to know. As such, these texts were infallible -- could not be wrong -- and inerrant -- had no mistakes.

The Bible is the only source of authority in matters of faith and practice for Christianity.

As I have asked repeatedly: Would SOMEONE please answer the question:

WHERE does the Bible claim that "the Bible" is the sole authority?

IF the Bible is the sole authority for matters of faith and practice in Christianity, then SURELY the Bible makes this claim about itself, right?

Otherwise, you have an utterly self-defeating argument:

Do you see the problem with this argument? Can SOMEONE please address this huge gaping hole in the reasoning here?

Perhaps the problem is in what advocates mean by "the sole source of authority in matters of faith and practice for Christianity." I'd entertain definitions of that notion, if anyone wants to tackle it.

But allow me to spell out the problems that I see with this notion, as I understand folk like Stan are making it...

1. If "The Bible is the sole source of authority in matters of faith and practice of Christianity" [SS], WHERE in the Bible does it specifically say this?

2. If it's not in the Bible specifically and literally (and clearly, factually, it simply isn't), then where does the Bible objectively and demonstrably even HINT at it?

4. Since that was an extrabiblical decision, how can we authoritatively know the 66 are "as Scripture," since it comes NOT from SS but from an extrabiblical, human decision? [Mind you, I accept the Bible "as Scripture," I'm just noting that this is not compliant with SS, as far as I can see.] Clearly, saying "We can know with authority that SS is true, why? Because of this EXTRABIBLICAL authority..." is not consistently logical. Indeed, it's a self-defeating argument.

5. Beyond that, the Bible (which is our SS, comes the claim), itself makes the claim of MULTIPLE ways of knowing about God. The Bible claims we can know about God...

a. Through the world itself (all of Creation tells of the glory of God)
b. Through God's Word/God's Law "written on our heart" (which could be interpreted as our conscience, our inate sense of God, and/or our reasoning)
c. Through the Holy Spirit of God revealing God to us ("these are the things God has revealed to us by his Spirit.")
d. Through our God given reasoning (come, let us reason together")

6. So, if the SS TELLS us that there are other sources of knowledge, then how could "the Bible" or "Scripture" be SS, since Scripture itself contradicts that claim?

7. As an aside, IF the Bible is the SS, then claims that "the Bible" is inerrant and infallible can not be justified because the Bible does not make that claim, either about "the Bible" or about Scriptural text. As always, this falls apart - even if you thought the text was somehow inerrant or infallible (which, again, is not a biblical claim) - as SOON as you have human eyes reading and human brains INTERPRETING the text. If "Love your enemies" is a teaching ENTIRELY without error, but someone reads it and finds justification for killing their enemies, then you have human interpretations of texts and human interpretations are, of necessity, fallible.

I'm open to polite, respectful discussion about this topic. I'm not open to comments about people. IF you think people who advocate such things are hypocrites or goofballs or inconsistent or irrational, I don't want to hear that. That may well be the case and that can be obvious if no rational answers are forthcoming, but I don't want to hear that. (Indeed, the one individual I recently tried talking to about this made extremely weird strawman arguments one after another rather than dealing with the questions I was asking - but maybe he was just on the immature side, that happens.) But I am open to direct answers to my direct questions.

WHERE does the Bible make the claim of SS?

WHAT of the passages within the Bible that claim other sources of knowledge/authority? 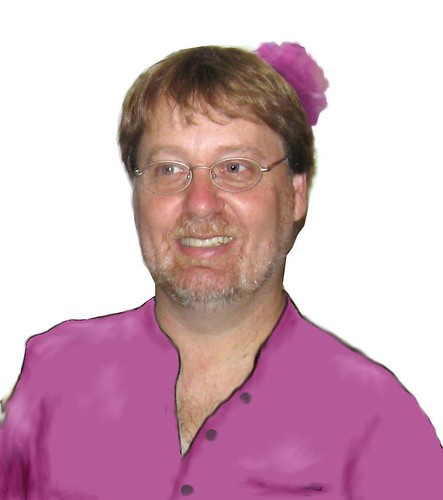 Friend of Dexter, a photo by paynehollow on Flickr.

You have to be some kind of industrial grade creep to pick on a two year old kid and his momma at the Walmarts. But, of course, there are people out there ready to step up and prove just how very large a creep they can be...

I gladly stand with young Dexter, his mother and anyone else who chooses to dress however they wish. Mind your own business, people.