Blackbeard Banjo, a photo by paynehollow on Flickr.
I'm With the Government and I Have a Plan??

Paul Waldman at Prospect.org is asking the question that I've been wanting to see asked. Waldman reviews Romney's economic proposals and concludes...

To review: The way Mitt Romney's economic plan differs from what George W. Bush did is that Romney favors exploiting energy resources, free trade, having a good education system, balancing the budget (something every candidate in both parties says they'll do, but only Bill Clinton actually did), tax cuts, and less regulation. In short, Romney's program is exactly the same as what George W. Bush did. Yet Romney says, "My policies are very different than anything you've seen in the past." Right.

Nobody is disputing that the economy could be better, unemployment could be lower and that would be a wonderful thing.

We're all agreed on that much.

The GOP inherited a healthy economy after Clinton's eight years, they had a chance to "improve" the economy with Republican policies and, at the end of eight years, the economy was in the crapper (not to mention that we were spending trillions of dollars on two questionable wars).

Mr Ryan/Romney: What are you going to do DIFFERENTLY than Bush did and why should we accept the rather overly-simplistic suggestion: Things aren't perfect, so let's change paths...?

The thing about changing paths is that, rather than making an improvement, things could get worse again. What are you proposing that would inspire us to trust you?

Anyone?
Posted by Dan Trabue at 2:03 PM 82 comments: Links to this post 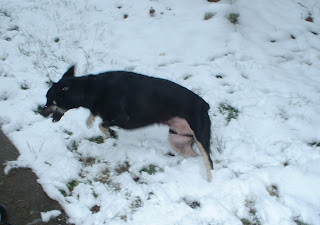 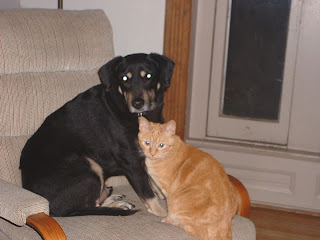 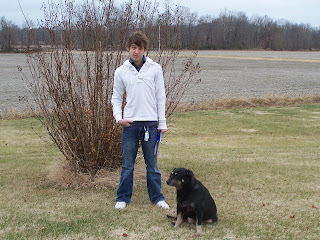 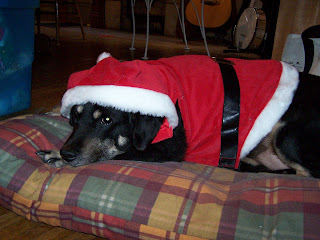 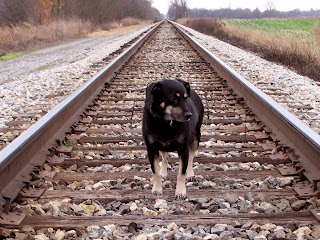 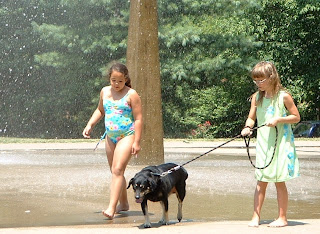 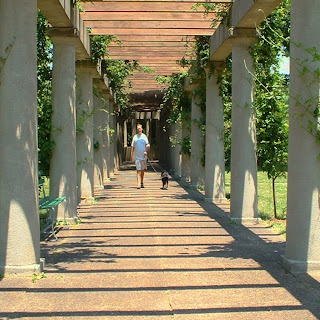 Posted by Dan Trabue at 8:51 AM No comments: Links to this post Jordan Howie Sarah, a photo by paynehollow on Flickr.
Our family lost our beloved Howie last night. Howie Seth Trabue, aka, John Howard Yoder Trabue, was our dear companion and fearless protector and he will be missed.
Posted by Dan Trabue at 4:26 AM 2 comments: Links to this post

"Are You Better Off?" Lighted Gateway, a photo by paynehollow on Flickr.
Some reflections on this presidential election...

I. I have always found the premise of the politicized question "Are you better off now than four years ago?" in very poor taste. The suggestion that we should vote based on how well we personally are doing financially under a particular president is a politics-by-fear and an appeal to personal greed that should have no place in a healthy republic. Where is the more noble call, "Ask not what my country can do for me, as why I can do for my country..."?

The question ("are you better off...?") was famously asked by Reagan in 1980, beginning his years of popularity by calling upon fear and greed. Poor form. Cheap politics.

II. Nonetheless, on a more holistic scale, it can be a reasonable question - are we heading generally in a better direction now than four years ago? It is not a question that I think the GOP really wants to raise, though.

III. For me and many, many others, that question is EASILY answered. No matter how disappointed we may be in many directions Obama has gone, there is no contest. The direction the GOP and George Bush were leading us in was an historically disastrous direction. We are infinitely better off now than four years ago. Light years.

There is no question, no contest, no doubt: Yes, I and we are better off now than four years ago.

IV. We can see that we're better off now in the hints by Romney/Ryan of the direction they'd like to take us in - the direction BACK to the Bush year policies.

For instance, Ryan and Romney (probably the better clarification of the direction of this team) have stated that Obama is not doing "enough" and is not "strong enough" a leader when it comes to foreign policy. What are they suggesting they'd do instead? Invade more nations under questionable pretenses? Spend even greater amounts - hundreds of billions dollars more? - in a never-ending war against the rest of the world-as-national defense?

No thank you. We've gone that route and it costs dearly and we quite frankly doubt the efficacy of foreign policy by bomb.

V. We see in Romney's just released comments about the so-called "dependent" and "thoughtless-ness" 47% of "victims..." Romney's contempt for the poor and middle class and, well, those who disagree with him and the GOP.

"I'll never convince them (the 47%) they should take personal responsibility and care for their lives... What I have to do is convince the 5 percent to 10 percent in the center that are independents, that are thoughtful." Romney said.

Oh, really? We're a bunch of leeches living off the gov't teat that won't take responsibility for our lives? We're not thoughtful?

Yes, I think we are solidly better off now than four years ago and I don't see any suggestion that Ryan/Romney want to take us any direction but backwards. We, the thoughtless and dependent, think we're doing better, thank you very much.
Posted by Dan Trabue at 3:57 AM 41 comments: Links to this post Grizzly Dan and Solly 2, a photo by paynehollow on Flickr.
Ethan Coen (of Coen Bros' Fame) has a birthday next week, giving me an excuse for this post.

In addition to his movies, he's made at least two book's worth of sometimes naughty, sometimes juvenile, but regularly funny Shel Silverstein-esque poetry. If you are not of the easily offended crowd, I can encourage checking them out.

Here's part of one that is fit for public consumption on a family blog...

The Drunken Driver has the Right of Way

The loudest have the final say,
The wanton win, the rash hold sway,
The realist's rules of order say
The drunken driver has the right of way.

The Kubla Khan can butt in line;
The biggest brute can take what's mine;
When heavyweights break wind, that's fine;
No matter what a judge might say,
The drunken driver has the right of way...

...It's only the naivest who'll
Deny this, that the reckless rule;
When facing an oncoming fool
The practiced and sagacious say
Watch out — one side — look sharp — gang way.

However much you plan and pray,
Alas, alack, tant pis, oy vey,
Now — heretofore — til Judgment Day,
The drunken driver has the right of way.

When My Marbles Have Left Me Will You Have?

When my marbles have left me, will you have?
When I drool a bit, doze and come to have
some more tea, and then mumble
of pee as I fumble
at pants about which I no clue have

Will you check that the pot's not still on?
Will you show me the way to the john?
Will you unlock the door
If I bay in there - or,
When my marbles have left me, will you have?

Or this one, which begins...

The Day the World Ends

The day the world ends
there will be the sound of a long, whining fart
And everyone on the street will stop
And look at each other as if to say What
the hell is that...

Here's the beginning of another, which I enjoyed...

O!
I love a poem that starts with O!
For it is a vigorous thing.
From a deeply felt spring
It must spring, and you know
that its rhymes all will ring
And its rhythms will flow...

Okay, so he might write poems that sound as if they were written by an exceptionally bright, well-read and thoughtful middle school boy, but they are fun to read. If you are not offended by abundant cursing and sometimes crude material, by all means, check them out. One last one...

For What It's Worth

If you can count your complement
Of digits up to twenty
You could give a toe or a finger to
A friend, and still have plenty.

You could even lend an ear to an
Unfortunate with none,
But by no means hand out noses since
Of those, you have but one.

No no-nose should fault you for your
Hoarding your more to his fewer,
For your gift would make what's true of
Him of you as true, or truer.

Just remind him his anasalness
Is the estate he chose
On that day when someone said to him
"I have a need of nose."

No no, Goodness knows no folly and
No wastrel knows the Good;
Hand out your nose and naught'll be
Right where your nose be should.

So act the lord with fingers and
Play fast and loose with toes,
But remember to remember,
Be tightfisted with your nose.
Posted by Dan Trabue at 8:44 AM 1 comment: Links to this post Romney VS Chair, a photo by paynehollow on Flickr.
So, I wonder when the Presidential debates start, if the Chair will be invited to take part.

If I were Romney, I would be worried - in the Eastwood-Chair debate, the chair won, handily. If Clint Freakin' Eastwood couldn't beat the Chair, what chance would Romney have?
Posted by Dan Trabue at 4:58 AM 5 comments: Links to this post