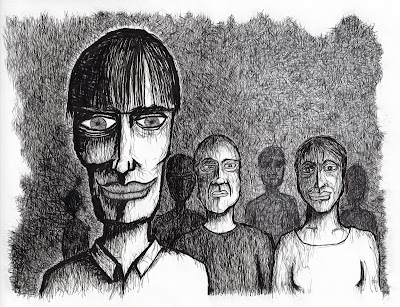 Stan at the Winging It blog recently posted the common evangelical trope about humanity being inherently evil/bad/not good. He was attacking the notion that humans could rightly be considered "good," and said, among other things...

The most common perspective today is that people are basically good. Sure, there's some bad ones, but, in general, we start out good.

There is a problem with that position. If humans are born good, why does no one end up good? Okay, that's one problem. The fact is that the Bible contradicts it.

From there, he did the standard conservative evangelical thing of cherry picking some verses from the Bible and offering that as "proof" of his position. As always, I'm not speaking about Stan himself in this post, just addressing this common conservative trope.


Here's a challenge for people like Stan: support your premise/claim. Prove that people are basically bad/evil/corrupt. Prove not only that people, in general, are not good... but that they are SO evil that the only proper response is to torture them for an eternity to punish them for their evil.
Prove it in some reasonable way. Don't merely saying, "Hey, there is a line in the bible that I personally think we should take literally - even though other lines in the Bible, I don't take them literally and I fully recognize that the various biblical authors use metaphors and hyperbole and imagery all the time... but THESE verses in the Bible should be taken literally..."

Don't merely say that, but offer some rational, reasoned support for it.
For instance, merely citing some verses in the Bible with the suggestion that they represent literal facts is not enough... not when you, yourself, recognize that at least some verses in the Bible are metaphors, some are hyperbole and some are otherwise figurative. So, the presence of one line that says something about the four corners of the earth is not "proof" of a square, flat earth any more than one line saying something about "babies are evil from birth and they speak lies" is sufficient proof of evil, lying babies.

In the real world, for such a claim as "humans are inherently evil... and not only that, but they are ALL (everyone of them) SO evil that, apart from some action, they deserve to be tortured for eternity to pay for their crimes (which, of course, can never be paid, since they'll be tortured for eternity). If you don't like the "tortured for eternity" language, we can substitute it for the more "biblical" (ish) language of "burn in hell forever, where there will be weeping and gnashing of teeth..."

Contrast that with this claim: I see good people every day. I see good people being kind, working for justice, helping people find homes or jobs or respect. People DO in fact do good things and I know this because I see it.

Which is more reasonable?

So, aside from some lines in an ancient text that SOME people say means that there are no good people, anywhere, what is the proof for such a hard to believe claim?

Gods in the Hands of an Angry Sinner 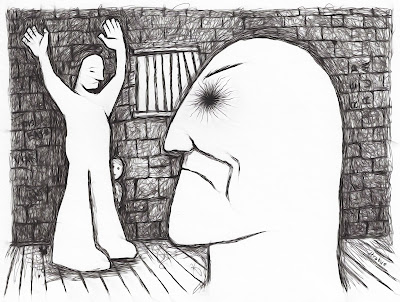 “No one can serve two masters. Either you will hate the one and love the other, or you will be devoted to the one and despise the other. You cannot serve both God and money.”

The Pharisees, who loved money, heard all this and were sneering at Jesus.

[Then, in the DIRECT and IMMEDIATE context of Jesus warning about the dangers of literal money and the commentary about the money-loving Pharisees sneering at Jesus and his words about wealth and poverty... Dan]

Jesus said to them...

“You are the ones who justify yourselves in the eyes of others, but God knows your hearts. What people value highly is detestable in God’s sight. [Again, in the immediate, direct context of Jesus warning about the dangers of literal wealth... and there's no context here that says he's talking about a mere abuse of wealth, he's just speaking of wealth, in general... DT]

“The Law and the Prophets were proclaimed until John. Since that time, the good news of the realm of God [which Jesus began his ministry as identifying it specifically as good news to the poor and marginalized... DT] is being preached, and everyone is forcing their way into it. It is easier for heaven and earth to disappear than for the least stroke of a pen to drop out of the Law.

The Rich man (nameless) and the Poor man (Lazarus)...

“There was a rich man who was dressed in purple and fine linen and lived in luxury every day. At his gate was laid a beggar named Lazarus, covered with sores and longing to eat what fell from the rich man’s table. Even the dogs came and licked his sores.

“The time came when the beggar died and the angels carried him to Abraham’s side. The rich man also died and was buried. In Hades, where he was in torment, he looked up and saw Abraham far away, with Lazarus by his side. So he called to him, ‘Father Abraham, have pity on me and send Lazarus to dip the tip of his finger in water and cool my tongue, because I am in agony in this fire.’

“But Abraham replied,
‘Son, remember that in your lifetime you received your good things,
while Lazarus received bad things,
but now
he is comforted here and you are in agony.
And besides all this, between us and you a great chasm has been set in place, so that those who want to go from here to you cannot, nor can anyone cross over from there to us.’

“He answered, ‘Then I beg you, father, send Lazarus to my family, for I have five brothers. Let him warn them, so that they will not also come to this place of torment.’

“Abraham replied, ‘They have Moses and the Prophets; let them listen to them.’

“‘No, father Abraham,’ he said, ‘but if someone from the dead goes to them, they will repent.’


“He said to him, ‘If they do not listen to Moses and the Prophets, they will not be convinced even if someone rises from the dead.’”
=========
Some thoughts from my pastor's sermon today...

* The rich man has no name and Lazarus is named. Then, as now, the rich were honored and had their literal big names. The poor were/are often nameless and forgotten. Jesus overturns the worldly tradition of honoring the wealthy and instead, throughout his ministry (which again, he identified as bringing good news to the poor as he began his ministry), honors the poor and marginalized, lifting them up as beloved by God and welcome at God's table of plenty.

* Even in torment, the rich man presumes to try to request favors (as befitting someone of his status...) and to try to order the poor man, Lazarus, to do his bidding ("Send LAZARUS to..." do my bidding...) Jesus' listeners would recognize this parody of the power of the wealthy for what it was.

* Would listeners of that time have heard the message...

"The good news for the poor is that, ONE DAY, maybe - if  you repent in just the right way and heed just the right message and you are one of the one's God has called - one day you MAY be saved and have a good life THEN... pie in the sky by and by, y'all... Not for most of you, poor slobs, but for the Few who are called..."?

OR, would the message being sent and received have been...

"The good news for the poor is that, here, now, God loves you and welcomes you to the realm of God. Share with one another, take one another in - especially the poor and marginalized - THIS is the realm of God, the realm of Grace for all, where all are welcome..."...? As was what happened with Jesus' followers and the early church.

If you read this story and think that the good news is NOT specifically for the poor, and it's really only for the very few who are called, then saying that the "good news" is not for all and not for the poor, but for the few who are called and then, only eventually, when we all (well some) get to heaven... It seems hard to reconcile that view with this story and what was likely being heard by the people then and there, especially given Jesus other repeated teachings about wealth and poverty.

I just don't know how you read "good news for the poor" that Jesus defined his ministry as it began and then just ignore "the poor" part of those words. I think they're there for a reason. I think this story points to that reason.