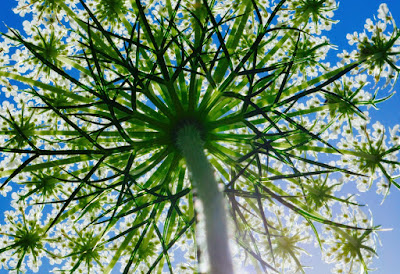 And in my moments of grief and groans
the world marches on without me
but not to leave me all alone
it's there, I know, all 'round me.
Posted by Dan Trabue at 12:51 PM No comments: Links to this post 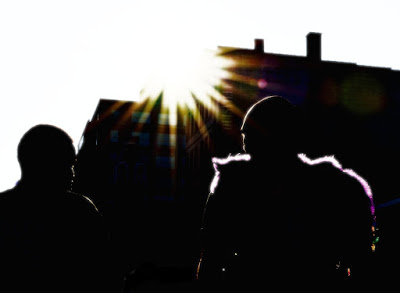 With so much bad news
in the news,
shootings,
hatred,
division,
oppression...

with all the bad news
it was a pleasant evening
to gather together with
a few thousand friends
and strangers
and take a stand for
Love. 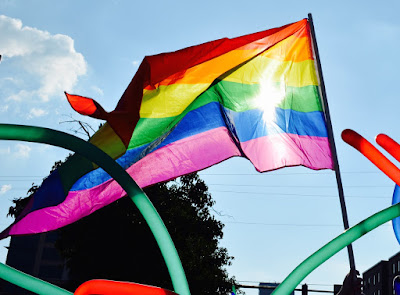 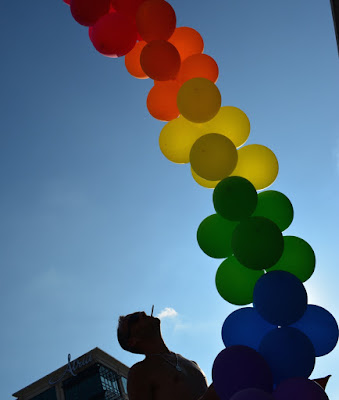 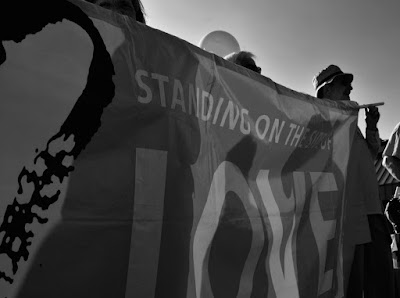 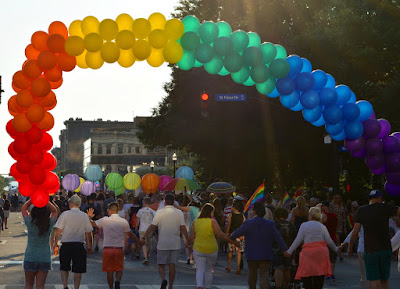 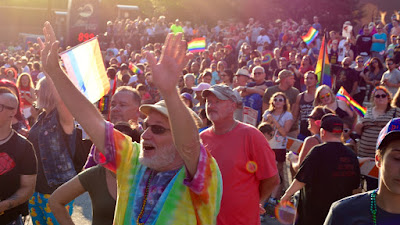 A Muslim Strategy for Peace-making 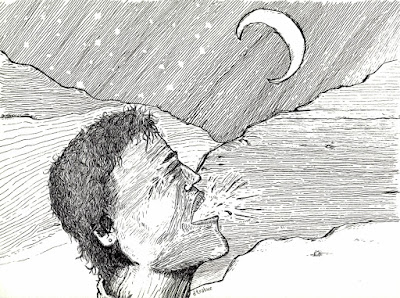 From an op-ed by Haroon Moghul, a fellow at the Institute for Social Policy and Understanding. His next book, "How to be a Muslim," will be out in 2017.

...The hundreds of millions of Muslims who reject extremism must start building out real, institutional alternatives to extremism, with serious funding, talent and commitment behind them. We've spent tens of millions of dollars in the United States, for example, and on what? We have some nice mosques. Most of them are empty most of the week, except for a few hours every Friday afternoon. We built some Islamic schools. I guess that's cool. But on the major metric, we've failed. It feels as if we are more unpopular than ever.

Many Americans want us banned from the country. In the battle for hearts and minds, we're losing. Badly. When Muhammad Ali died, a lot of Muslims I know were despondent precisely because they wondered if we would ever see such a champion again.
We need to turn this around. We need to fight back against extremism. We need to take ownership of the problems, because it's the only way we're going to take ownership of the solution. If you can't criticize yourself, you can't better yourself. If you can't lay out a vision of the future, you're going to live someone else's future.
I'm calling for the chaotic Muslim middle -- too long unrepresented or underrepresented -- not to stand up and speak out, but to stand up and build out. We must design, fund, sustain and expand programs that target the very people extremists are going after. Young men and young women of all backgrounds. These programs would realize a positive vision of Islam. They'd make young people feel like they're doing something. They'd make them feel valuable. Empowered. Capable. Agents.
As a friend of mine likes to put it, these programs should help create protagonists, writers of their own narrative. That becomes the kind of program that young people all over the world want to be part of. They should be so well-funded that we can afford to take people regardless of their personal circumstance. So egalitarian they aim to assist and uplift people regardless of where they come from, what color their skin is, what religion they believe in, or what language they speak. That begin to crowd out the extremist narrative, and extremist ideology.
Imagine if we could send significant numbers of young Muslims to meet their co-religionists and offer them aid and assistance, or to meet people they've never been exposed to, to be taught and to teach. Imagine if we leveraged our resources and our numbers to fight hate, intolerance and extremism. Imagine if young people saw they could help their co-religionists by working with mainstream institutions.
I am tired of simply saying terrorism is wrong. We should know that already. We should be known for that. I'd rather build up an alternative, a Muslim world that doesn't just reject extremism in word, but defeats it in deed, that does more than acknowledge homophobia, and intolerance (and the many other ills we see rampant in some Muslim communities, like anti-Semitism and racism), but actively fights them.
We certainly have the resources among us. We have more reasons to act now than we should...
http://www.cnn.com/2016/06/12/opinions/orlando-shooting-moghul/index.html
Posted by Dan Trabue at 7:20 PM No comments: Links to this post

An Insane and Hellish Legalism...

From Stan, at the fundamentalist blog, Winging It, on the "Regulative Principle of Worship...."

"I'd guess that most of you have never heard of this concept. Don't worry. I wouldn't expect it. Popular at one point, there are now very few churches that subscribe to it and, as you would expect, the rest have mostly put it out of their minds. So ... what is it? You've heard, I assume, of the principle of Christian Liberty. Based on passages like Romans 14 and1 Corinthians 10:23-33, this principle holds that Christians are permitted to do anything that God's Word does not forbid within the confines of conscience. Now, that's an oversimplification, perhaps, and there are lots of considerations, but that's the idea. Well, the regulative principle of worship is like that, except in reverse. This principle says that in worship believers are only permitted to do that which God commands.

The idea, believe it or not, comes from Scripture. The most compelling clue comes from the story of Nadab and Abihu. These priests, sons of Aaron, offered "strange fire" and were instantly burned to death (Lev 10:1-2). For "strange fire"? Oh, sure, the ESV says "unauthorized fire", like that helps. The point is that they didn't violate a command from God; they simply did something in worship that He had not commanded. When Aaron started to complain, Moses told him, "This is what the LORD has said: 'Among those who are near Me I will be sanctified, and before all the people I will be glorified.'" And the text says that with that, "Aaron held his peace." (Lev 10:3)

It looks then like God is concerned with specifics in the worship He receives. Thus, Moses was not allowed to make whatever he thought appropriate for the tabernacle. He had to make everything "after the pattern for them, which is being shown you on the mountain." (Exo 25:40) The first two commands of the Decalogue are about the proper worship of God (Exo 20:1-6). Paul warns about "self-made religion" which "have indeed an appearance of wisdom" but "are of no value in stopping the indulgence of the flesh." (Col 2:23) Jesus rejected "the traditions of the elders" (Matt 15:1-13) and required a return to "the commandment of God". So it looks like the regulative principle of worship may have a biblical case.

After that, of course, the case breaks down..."

I will point out that my response is not, of course, an attack on Stan, but on this human (and nutty-sounding) theory... The "Regulative Principle of Worship..." Also, I will note that Stan does not fully endorse the claim. He merely says he thinks "the case for the regulative principle of worship has merit."

Here we have a "principle" that Jesus never advocated being proposed as a serious Christian tenet. The case is built almost entirely on one obscure passage from the OT, and even there, it does not promote this as a principle, but humans have taken the passage and fabricated out of thin air a principle they extrapolated from this obscure passage something that even Stan notes is the reverse of a more reasonable and consistently biblical theory, the idea of Christian Liberty.

[I will note here that I find Stan's description of Christian Liberty interesting, as taken literally, it would destroy his arguments against gay folk marrying, since God's Word never "forbids" it... it is a human extrapolation. So, presumably if one is going to be consistent on the notion of Christian Liberty, one would embrace grace on the topic of gay folk marrying or transgender folk going to the bathroom in the reasonably appropriate place, rather than the legalism of modern fundamentalist/conservatives.]

Using this approach, all manner of evil and craziness could be promoted as "coming from Scripture."

"There's this line in the Bible where God clearly okays the selling of one's daughters into forced marriages. This comes from Scripture and, thus God..."

"I just read about how God told the Israelites to slaughter all the people of a nation when they invade, so that is how God wants us to deal with our enemies, it comes from Scripture..."

This is the problem with the legalistic approach to using/misusing/abusing the Bible... Merely finding a passage and then, extrapolating OUT FROM that passage a human theory about what God wants (even when God never said so) is a potentially horrible idea. However, as long as you are fine with admitting it is your theory and NOT "God's Word," then okay, so perhaps it lets you extrapolate out bad or irrational theories, but it is clearly your theory and you gladly and humbly admit as much. We might could live with that. But the problem is when one conflates the extrapolated human theory with God's Word.

"It comes from Scripture..."

The idea, believe it or not, comes from a HUMAN head, not from God. It is something that humans are extrapolating out and imposing upon God when God has not said it. That is a bad idea. It is irrational and presumptuous and, quite possibly, even evil. Don't do that.

The one line Stan (and presumably others who might agree) got right is, "the case breaks down."

Indeed, the case breaks down when you move from an amusing "what if this were taken THAT way...?" party game about human theories and the Bible and move to "I've decided this is biblical and thus, what God wants. HEED MY WORD."